← back to
Rave On Records
Get fresh music recommendations delivered to your inbox every Friday.
We've updated our Terms of Use. You can review the changes here. 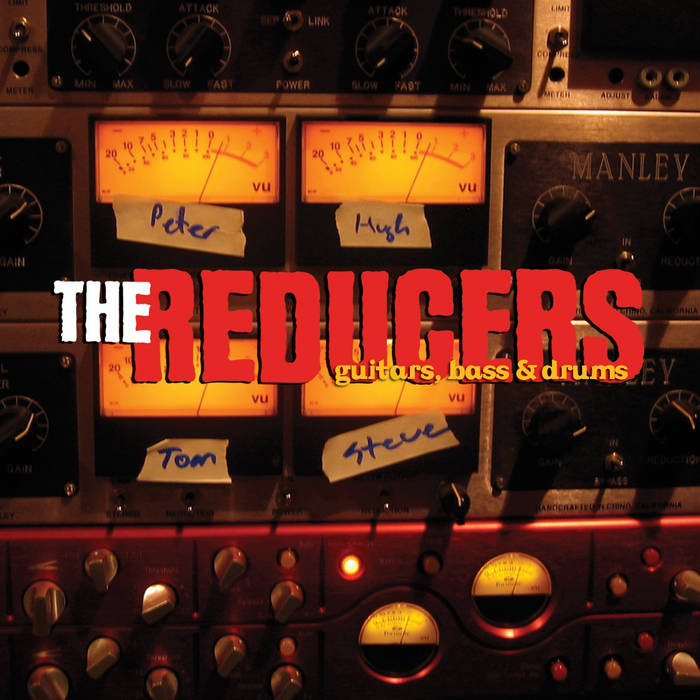 Triumphant 2008 release featuring the anthemic "Don't Ya Wanna"(Rock)" and "My Problem," with guest vocal from Mark Mulcahy (Miracle Legion, Polaris).

They're upbeat bad boys. They're pessimistic roots rockers. They punk it up. They bop . They analyze (“Oh dear, she's having a meltdown”). Like the Buzzcocks, The Reducers have two strong creative voices at the helm -Peter Detmold and Hugh Birdsall are each great songwriting frontmen. Together, they're unbeatable. Their shared knack for emphatic rock statements makes the job of the rhythm section-bassist Steve Kaika and drummer Tom Trombley-that much harder, and that much more impressive. Some Reducers songs are admittedly a hair-band's breadth from becoming a much cheesier kind of rock, so it's the band's stripped-down style, unencumbered solos and nods to rockabilly, punk and I'm even gonna say hardcore Henry Mancini that keep all this 30-year-old band's material on the highest plateau of hip. As for this album's extraordinary 10th track, “My Problem”-a typical Reducer mix of tough vulnerability, misfit identity and emotional control, yet handed to a guest vocalist, Connecticut proto-indie '80s contemporary Mark Mulcahy-whole books could be written on its virtues, if the scribes could even pick up a pen after hearing it. - Christopher Arnott, New Haven Advocate

These 11 tunes sizzle, with revved-up guitars cruising along over taut bass and spot-on drums drawn from the garage- and pub-rock traditions. The guitar riffs are tight and loud, and the melodies take unerring aim at that part of your brain that feeds them onto an endless loop for your continued (and continual) listening pleasure.
- Eric Danton, Hartford Courant

The Reducers
1978–2012
NEW LONDON, CT: The Reducers spent more than three decades resisting the fickle turns of popular taste, the musical fashion, and the temptations of the music-industry buzz that briefly threatened to turn them into the Next Big Thing. Instead, the band spontaneously moved forward on its own uncompromising terms, continuing to make brilliant, personally charged rock 'n' roll. ... more

Bandcamp Daily  your guide to the world of Bandcamp

Mille Petrozza stops by to talk about the new Kreator album, plus music by Trauma Bond